Dressed in his navy blue Yankees hooded sweatshirt and jeans, Greg H. is not too concerned about getting drops of pink ceiling paint on them.

In fact, he remains free of any splatters as he dips the long-handled roller into the pink paint and applies it to the ceiling of the dining room at SERV’s group home in Middlesex County. He explains that while the paint looks pink in the bucket while wet, it will turn white as it dries on the ceiling. This makes it easier to see if you’ve missed any spots.

Painting is just one of his many jobs as a part-time maintenance worker for SERV Behavioral Health System, Inc. Greg, the 37-year-old who once was good enough to play baseball with the minors, today is happy to have permanent part-time employment doing the same work he did as a “resident maintenance helper” for 18 months with SERV.

While some SERV resident consumers take on temporary/transitional maintenance-helper positions designed specifically to prepare them for the job market, Greg is the first consumer to become a permanent part-time employee with SERV’s maintenance department. He has been in the position for nine months now and is considered “part of the family” by full-time SERV employees Isaac Johnson, Middlesex County facilities manager; and Glenn Gorski and Joe Sowa. “He is like a little brother instead of just a co-worker,” says Johnson, who notes that Greg is quick to learn any new skill. 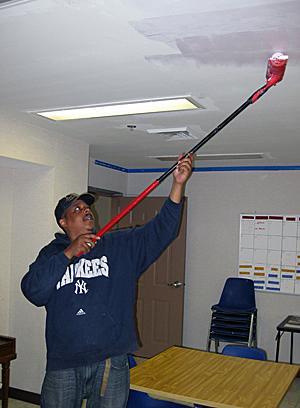 Greg paints the ceiling of the dining room at a SERV group home in Middlesex County.Greg has been a consumer with SERV Centers Middlesex County since June 2004, when he left Trenton Psychiatric Hospital, where he was being treated for paranoid schizophrenia. With the help of proper medicine, Greg is now able to ignore the voices that come into his head. “When I’m busy and I’m working, I don’t pay much attention to (them),” says Greg, who spends a minimum 20 hours a week doing fix-it jobs at SERV Centers’ and SERV Achievement Centers’ group homes and apartments for individuals recovering from a serious mental illness or coping with a developmental disability.

Amanda Lowe, Greg’s Residential Program Manager (RPM), says Greg has become much more mature, responsible and confident since he interviewed for the position and began work with the maintenance team. “He has formed a good relationship with his co-workers and they are good role models for him,” she says.

Greg learned much of what he knows about maintenance work from his father, Jerry, who built his own car and a house. “I helped him out so much (as a young man), that when I started work at SERV, I knew what NOT to touch,” he says, showing his ever-ready sense of humor.

It was Greg’s father who said to him, “You’ve got to do something with your life,” when Greg, then in his mid-20s, came home to Metuchen after spending a couple of years in California working and getting high on marijuana.

“It was a party,” says Greg, who tried to rid the voices in his head by smoking pot. “I heard nothing when I was high. When I stopped, the voices started.” He pauses and says wryly, “Well, I might have heard them, but maybe just forgot.”

His earlier college years at Delaware State, Labette Community College and the University of Central Arkansas were focused on baseball, not his studies. “I never made it to class … I majored in baseball,” he says with a laugh. He was promised a spot as a shortstop with a minor league baseball team in Florida if he made up his classes, but he chose to give it up. “I knew I wasn’t going to the majors. I was like 140 pounds. I had a good run (with college baseball) and was pretty satisfied with it.”

Back at home in Metuchen, he entered a psychiatric hospital in the area because he became suspicious of people around him, thinking they were conspiring against him.

Once out of the hospital, he continued to take the prescribed medicines, but had a bad reaction to them. He managed to live with the voices as he worked toward an associate’s degree in electronics technology at DeVry Institute in North Brunswick. After graduation, he got a job in Manhattan, where he plied his trade at companies on Park Avenue and Wall Street. But the voices “became too much.”

“I saved up money and took off to Mexico. At the time, I figured if I got out of America, the voices would go away.” He smiles and says with a chuckle, “That didn’t happen. Plan A was scrapped.”

He spent two months in Tijuana, all the while smoking pot and drinking. “I was waging war on the voices, which were there to point out my insecurities.”

When he ran out of money, he came back to New Jersey and entered Trenton Psychiatric Hospital, where he became stabilized on a medicine that worked for him.

Able to manage the voices in his head, Greg began his life with SERV.

“Now, I don’t have to respond to the voices … that might say, ‘Don’t drive today.’ So, I’d be like, I’m going to drive because you told me not to drive.’ You just hear them and go about your day. Nowadays, I’m just so used to it; it’s a part of life.”

When Greg came to SERV in 2004 he stopped taking drugs.   “My mom always says that I was blessed when I came to SERV. She said they would take care of me.”

Today, Greg enjoys watching all sports on television in the supervised B-level apartment he shares with two other SERV consumers. As far as participating in sports, an occasional wiffleball game with other residents might start up outside the apartments. And then there is the occasional round of golf when he visits his father in Delaware. “I beat him the last time out,” he says.

All three residents are responsible for the cleanliness of the apartment. “We’ve got this thing,” Greg says. “If you mess it up, clean it up.”

Greg also is learning from his RPM, Amanda, how to budget his work money, though he clearly would rather leave the details to her. He smiles when she reminds him how capable he is in handling his finances.

Greg’s goal is to one day be on his own; he is on a waiting list for Section 8 Housing in Perth Amboy. “He has worked so hard for his independence,” Amanda says.

But in the meantime, Greg is happy to be in the Residential Program at SERV, while also working for SERV. “When everything was going crazy, SERV had the answers to give me. They offered some type of consistency and sanity. And, I like (working) because it’s not in one place all day. Time goes by real fast because I am always busy. Before you know it, you look up at the clock and it’s time to go home.