Tim ‘reframes’ his life with SERV 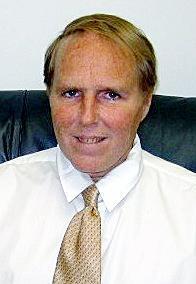 “I gave myself a chance when I came to SERV, because I was out of options.”

That leap of faith is how Timothy M., a consumer with SERV Centers Hudson County, describes his journey from the despair of mental illness, addiction and homelessness to his current state of psychiatric stability, imminent independent apartment living in SERV’s Supportive Housing Program, and nearing the completion of his master’s degree in English literature.

“I went from chaos to stability,” Tim says of his life after joining SERV Behavioral Health System, Inc.’s SERV Centers Hudson County, based in Clifton, in 2004. “Prior to SERV, I was living on the fringe of society, desperate, fearful, a total wreck as a person,” says Tim, an articulate, soft-spoken man of 42 who has bipolar disorder with depressive symptoms.

Today, with the help of SERV’s supportive staff, Tim is psychiatrically stable, attends support groups to remain free of drugs and alcohol, will soon move from a SERV group home to his own apartment in SERV’s Supportive Independent Living program, and continues to pursue his interests of writing and drawing. 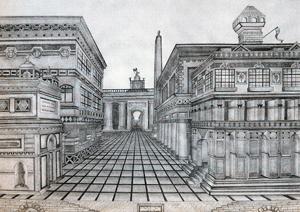 Click for larger image.A talented artist who has never had formal training, Tim recently was selected by the New Jersey Psychiatric Rehabilitation Association to have his pencil-with-ruler drawing, “A Roman Perspective,” featured on the February page of its 2009 calendar. Tim’s meticulous and exquisitely detailed architectural drawing was one of only 12 chosen from artwork submitted to a contest by more than 200 mental health consumers from throughout New Jersey. Tim is proud to note that Mount Carmel Guild of Jersey City, the referral agency that connected him to SERV, bought his winning artwork and now has it displayed in its board room.

Tim’s creative side also has been expressed in his writings, which noted poet and award-winning author Maya Angelou once called “astounding” when she guided him during an “African Folklore and History” independent study program while he was a student in English literature at Wake Forest University in North Carolina. “She gave me an A on my exam,” says Tim, who is now working on a “fictional, autobiographical novel” tentatively titled “The Bondage of Self.”

The book is about a man’s history of psychiatric hospitalizations, homelessness, desperate struggle with alcohol and drug addiction, and his eventual journey toward recovery and wellness.

Tim recently told a visitor his authentic story of mental illness and where bipolar disorder led him, but he preferred to focus on the recovery aspect and the people at SERV who believed in him and gave him inspiration and encouragement.

In explaining his illness that eventually led him into SERV’s care in December 2004, Tim says his bipolar disorder (extremes of mood from mania to depression) disrupted his life and led him down the path of self-destruction. “My manic state gave me a sense of euphoria. I would stay up days on end. I had boundless energy and erratic behavior. It was like a drug in itself.”   Conversely, during his depressive phase, he “would isolate, sleep more and eat less. I was tired all the time.” During this state, he also heard voices “repeating my name and urging me to hurt myself.” That was the beginning of one of several hospitalizations and anti-psychotic medications to stabilize his moods.

Tim’s mental illness ballooned while he was a student in college, he says. During his manic state, he would get good grades, but when depressed, he’d drop classes and isolate. After graduation, he began work as an editor for a news wire agency and was promoted to editorial manager in Los Angeles, where he worked for eight years. “It was perfect for my mania,” Tim recalls, because the job was fast-paced. After work, though, he began to drink alcohol every night. The Employee Assistance Program where he worked helped him to enter a rehabilitation program for 30 days, but he later went back to drinking and discontinued his bipolar medication.

His attempt to find another job led him to an interview in New York, but because of his drinking, he never made it to the appointment. That is when he found himself homeless in New Jersey, where he spent the next 13 months on Hoboken Pier, in “full bipolar disorder.”   He survived by visiting soup kitchens for dinner, attending a lunch program, and showering at a shelter two times a week. “My anxiety grew into fear. I was just confused.”

Tim’s hard life took a turn when some friends took him to a men’s shelter in Union City. It was there that he was referred to a day treatment program at Mount Carmel Guild in Jersey City. The Guild helped him to become stabilized on bipolar medication and later referred him to SERV Centers Hudson County.

“SERV rescued me from the shelter and I entered one of the apartments in Union City, he says, referring to SERV’s group-home setting, where he stayed for two years. “When SERV entered the picture, that’s when I gave up alcohol and drugs. I was broken down and they offered hope and enrichment in my life. It has come true.” With his newfound sobriety, he started making better choices for his life.

He smiles when he talks about how SERV intervened in his life, giving him support while also encouraging him to stay med-compliant. “SERV fosters a very caring and enriching environment. They offer empathy and spur me on to the next great thing.”

Tim sees more than one great thing in his future. In addition to his novel in progress, he is just 16 credits away from getting his master’s degree in English literature. He plans to pursue a Ph.D. and to teach on the high school or college level.

He also has begun work on a new piece of artwork: the Hudson County Courthouse in Jersey City. “It is a perfect example of Renaissance architecture … a magnificent building,” says Tim, whose work has been in several exhibitions. “SERV provided me with art supplies to encourage the outlet for realizing my potential.”

Another of Tim’s goals is to be reunited with his whole family. He acknowledges that he “burnt bridges” with his parents and siblings during his manic phases, but that some of his family members are now very supportive of his recovery. “It will take time,” he says.

Tim has nothing but praise for SERV’s Residential Program Managers who have helped him to stay the course. There’s Robin, who gave him inspiration; and now Victoria, who “has a positive outlook, is energetic and very supportive.” Maxine, his counselor, provides an empathetic ear as he talks out his problems, he says.

Tim would like others who struggle with mental illness to know that SERV “offers a helping hand when you most need it. You can rediscover where you are at and where you are going in life.”

Tim’s life is now rooted in recovery. He is determined to continue his path by attending support meetings to remain clean and sober, listening to his SERV counselors’ suggestions, staying med-compliant, and remaining physically active.

“By looking at my life and seeing good in myself, (I can) reframe what I see and it’s not all that bad.”